Home > Blog > I Was Thankful for Insurance When… Part 2

I Was Thankful for Insurance When… Part 2

Our lives are filled with stories. Not just one big story, but many small snapshots of events.  When all are strung together they create an intricate web of realities.  We have “happy” stories, “sad” stories, “what-if” stories, “what-was-I-thinking” stories and those ever-present “thank goodness” stories. It is these “thank goodness” stories that seem to stick with use the longest. They always come linger longest just when we need something to remind us of how different things might have turned out.

Rebecca’s Story – Be Ready for Anything

Our first story helps us to see that even when unexpected events come along, the positive knowledge that you have coverage to protect you and your family is a comfort in uncertain times.We have all been in situations that take us by surprise and through Rebecca’s story we see the true value of a great policy and why her family was thankful. 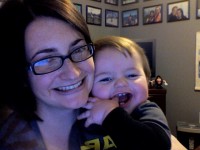 My routine 30-week ultrasound was anything but routine. It revealed some bright spots in the heart that required regular monitoring. There was no conclusive diagnosis. By the time I actually gave birth, monitoring had established that his heart was functioning perfectly. His initial examination went well, but a few hours later he began to have seizures.

The combination of the heart irregularity and the seizures were the tip off. Those are two major markers of tuberous sclerosis complex, a rare genetic disorder that causes the growth of benign tumors on the organs. His diagnosis was confirmed with an MRI of the brain, and later a DNA test confirmed he had TSC2. Instead of going home with us on the day of my discharge, he remained in the NICU as they tried to get the seizures under control. One 48-hour EEG revealed 82 seizures, many of which were not visible to the eye. Medications were not helping. He spent five weeks in the NICU before they got enough control to send him home. We returned when he was four months old for a brain surgery to help with the seizures.

His NICU bills totaled more than $200,000. His surgery was more than $70,000.  He needed a variety a seizure medications, including a specialty drug that costs thousands a month. He had several short office EEGs, as well as a 72-hour in-patient one that cost over $12,000.

Though Connor is doing well and is a happy toddler, we are still dealing with seizures and developmental delays. He receives weekly speech and physical therapy. He will need regular MRIs and scans of his brain and kidneys for the rest of his life. I don’t even want to know what would have happened if we hadn’t had a comprehensive insurance plan in place.

Rebecca Gaunt is the chair of the Atlanta/North Georgia TS Alliance. She blogs to raise awareness of tuberous sclerosis complex at Mixed Up Mommy.

In our second story we see that even insurance companies can make mistakes sometimes. It is a scary thought when something you had planned on was suddenly not there when you need it. This is why knowing as much about your policy as you can is very important. This also goes to show that by Kimberly’s family choosing the right companies they were sure to be taken care of.

When the dot com bubble burst, my husband lost his job. As if not stressful enough, I was pregnant and it was becoming more and more high risk. Under these circumstances, we gladly paid out for COBRA, knowing that the cost of a high risk pregnancy (that ultimately required many hospital stays and an emergency c-section) was more than we could pay for out of pocket.

One day, without warning or reason, our COBRA insurance was cut. It was their error – an important point because once a lawyer pointed out their error, all was reinstated – but in that time when it appeared we were going to have a baby without insurance, things were scary. We didn’t qualify for any government safety net, and what was supposed to be a time of excitement and joy, was instead one long panic attack.

When our insurance was reinstated, we breathed a long sigh of relief. A few months later, following the emergency delivery at 35 weeks, when the statements from the hospital started to come in, I’d look at the dollar amount on the bottom of each pages long bill and know that to have paid for that would have crippled us in debt.

Kimberly Kauer works mainly as a personal assistant to two pint-sized, yet tough-as-nails clients: Clover and Rocket. Kimberly works as a writer and social media consultant. She lives with her husband, two kids, and a skittish turtle in the San Francisco Bay Area. Kimberly blogs on her site, Silicon Valley Mamas.

Mindy’s Story – Have All the Pieces in Place

In our third story we see that families can come into being in more than one way. Also, even though you may have all your ducks in a row it does not always make things easy. In Mindy’s story we see that choosing the right policies can take a lot of the pressure off the situation and the focus can be on all the little things that matter.

When my husband and I wanted to start a family, we knew we needed health insurance. In fact, we counted it as the last piece in our “OK, we’re ready to be parents” puzzle. I assumed we’d need it to cover prenatal care, labor and delivery. But soon I was using it for procedures and tests. Infertility is painful enough without worrying about the cost. It gave us enormous peace to see some of the best doctors in New York City, including those for mental health. And when our daughter arrived via adoption, we had the same peace regarding her care.

Trisha’s Story – Kids Will Be Kids

In our final story we see that insurance is not simply for the big things that go wrong, but the many little things that might come along as well. Trisha’s story gives us a glimpse into the life of a typical young family, there are so many outcomes possible that the only sure thing is that one of them will happen – good or bad.

Thankfully we have been fortunate enough to always have insurance. From military to private care, we have been covered and happily so! My daughter, ever the adventurer, was a climber from early on. I can still remember removing our cat condo from the house after finding her at 18 months at the very top. Nearly every year from the start of two years old she has unfortunately had an ER visit for some sort of discovery she got herself into.

One of the most memorable ones was the day after Christmas, six years old, where she was sitting on a neighbors new Tonka truck and he pulled it out from under her. She fell face first on the concrete busting her chin open so far you could see the inside of her mouth. Three hours and four stitches later we were out of the ER. Not weeks later the skin grew over the stitches and had to be taken out manually. She bares the scars of that part of her childhood and we were lucky to have it covered not once, but twice, during the holiday season.

Two years ago I had another child. This time a boy and just as adventurous, but with a wild streak as well. Starting before two this time, we had our first ER visit that also included a toy and a cut open mouth. Both of my kids have been strong and have, for lack of a better term, taken it all “like a man” but I am just grateful that I was able to spend more time putting my focus on their healing then a pile of bills!

Trisha Haas is a professional mom blogger at MomDot, a mom blogging community where she connects with readers via personal and parenting stories. She uses the site to assist newbie bloggers in information on how to start a blog, run contests, connect with Public Relations, and encourage community online.

All of our stories are very different with one common theme resounding through them, thank goodness. Having the security that when the times comes for you to make use of your insurance policies that they are in place and waiting for you. We never know that the next chapter in our story might hold, but something to always keep in mind with the right policy things will work out. And who knows? The next chapter might be even better than that last.